Can Competition Shooters Defend Themselves? 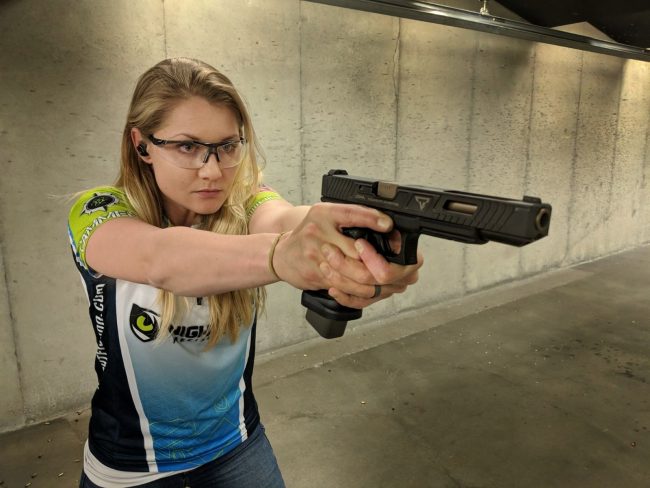 Can Competition Shooters Defend Themselves?

I have recently participated in a couple interviews and round table discussions which focused on the validity of using competition shooting to prepare for self-defense shooting. More specifically, if participating in the shooting sports hurts or helps someone who also carries a gun and trains for self-defense. This question seems to be a serious bone of contention between the “Tactical” and “Competition” crowds. DISCLAIMER: I’m not unbiased. As a nationally ranked competitive shooter AND someone who teaches the use of firearms for self-defense all over the world, I’ve given this topic much thought, and I have some opinions.

For what it’s worth, most of the folks I shoot matches with ALSO keep and carry firearms for self-defense. These people are passionate about excelling in the sport they play, take the responsibility of defending themselves and their loved ones seriously, and know that there are ways for each of these goals to benefit from the other.  Sure, competition isn’t real life, but there are some undeniable similarities between the goals of a competition shooter, and someone who may be using a gun to defend their lives. It is these similarities, not differences, on which I chose to lean my focus in this article.

So what’s the beef? The general consensus from the tactical side of the room is that the habits and techniques picked up in competition will “get you killed in real life”. Essentially, competition is good as long as we all understand it’s just a game and nothing more. A frequent argument in the comments sections of YouTube or Facebook videos is that running around shooting at targets that “don’t shoot back” is child’s play with virtually no cross-over in the tactical world. Newsflash, getting shot at by a target isn’t part of any practice, competition or tactical training. That’s a gunfight, my friend! Experiencing a gunfight to train for experiencing a gunfight is a course in life-skills I won’t be taking as an elective this semester, or ever.

During a recent round table discussion on this topic I said that the only self- defense principle that competition doesn’t support are tactics. Here is a short list of skills or principles that are important in both competition and self-defense shooting: accuracy, speed, movement, shooting while moving, effective firearm manipulation of at least one platform, low light/no light shooting, target transitions, reloads, ballistics performance knowledge, zeroing, recoil management, mental planning, performing under stress and with an elevated heartrate, malfunction clearing and mechanical offset.  The list of what we have in common between the two worlds is longer than the list of what we don’t.

I was even partially wrong when I said that competition doesn’t fully support tactics. The definition of tactics is “a planned action for accomplishing an end”.  That to me means knowing what you want to do, understanding what it will take to do it, and then doing it. I know I’m splitting hairs here. And no, I’m not saying that shooting competition is a substitute for the police academy. I’m simply following my original (and controversial) thread of similarities between competition and defense and seeing how closely intertwined they are, or are not.

In competition we not only have to be excellent at everything on the list above, we must do those things while following our mental plan, performing other physical tasks designed to produce fatigue, and combating environmental concerns all at the same time. Hold up. Rewind to the beginning of that last statement and replace “competition” with “self-defense scenario”. Yeah, more similarities.

One of the biggest reasons I continue to shoot competitively is…it’s hard…even without the targets that shoot back!I’ve been to winter matches where I had to shoot while experiencing symptoms of hypothermia and heat exhaustion in the summer. I’ve had to operate my equipment and keep my guns running while dealing with harsh environmental conditions like malfunction-inducing moon dust sand in Arizona, intense humidity in the Floridian swamps, mud pits in Virginia and snowstorms in Missouri. I’ve climbed in and out of trenches, crawled under barbed wire and scaled lookout towers. I’ve shot paper targets, steel targets, clay targets, moving targets, floating targets and flying targets.  I’ve shot from rooftops, while crawling through tunnels, hanging from rope, balancing on narrow boards and from out of and around vehicles.

None of this means I’m ready to do room clearing with a S.W.A.T. team. None of my trophies or titles guarantee me a win in a self-defense encounter. What it does mean is that I know my guns and equipment inside and out. I can shoot accurately on the move. I know what to do when things go wrong with my environment, myself and my guns. I am getting used to and learning to control how my body performs as it responds to stress. All that I have done to become a better competitive shooter has given me a solid and proven basic firearm skillset that I can apply to a variety of tasks in either world.