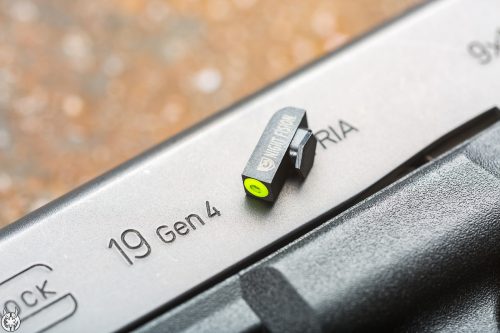 Here is my story…

Problem #1 Like most folks in their “early” fifties I started to have difficulty seeing things as they were  in the past as my eyes age.  I found that my eye was not picking up the front sight on presentation but rather grabbing the rear sights immediately then forcing me to transition to the threat and then back to the front sight.  This proved slow and it is not what we teach… i.e. “FRONT SIGHT FOCUS” and it is slow.

I tried about every different style of sights and color combinations to no real success.  Lucky for me as an Instructor, all of these became demonstration options for my students to try out on the range; but none satisfied me.

Fiber-optics are awesome for outdoor daytime shooting (such as IDPA) as they glow like crazy but offer no solution to the night/reduced lighting environment.  I tried the very large white front dot on a ‘ramped’ rear sight and really liked it but being a M&P shooter that brand offered no rear tritium for M&P pistols… oh and I can’t get the darn pistol out of my Galco King-Tuk IWB holster as the dot catches on the lower edge of the holster’s Kydex mold.  I also thought there was not enough glow in the front dot.

Well… next stop is the integrated light/laser add-on module route.  Sure, the light and green laser is worth the extra (lots of extra) cash but now I have all kinds of light/laser-equipped pistols that don’t fit into all kinds of my holsters.  UGG… will it ever end??

I was frustrated and figured that there was no real answer to my issues and wants.  I spoke with literally a hundred shooters about their chosen aftermarket sights and none were 100% satisfied so I figured I would not be either!  Then I saw Night Fision Sights highlighted on a James Yeager Tactical Response video.  Knowing that NOBODY gets on his channel without have a very high-quality product, a strong corporate policy of making great products and backing them with 100% great customer service I watched that video three times and thought well… OK let’s try these guys.  A call to Customer Service to find out a bit more about the sights and I was impressed by when the call was answered on the second ring, and it was not a VM – but a fellow named C. J.  A real person located right here in Metro Detroit!  A good ten-minute conversation later and I was ready to buy.  I said, “OK thanks, I’ll go online and order them right now.”  CJ said, “Don’t bother – I’ll take your order.”  He did and a day or two later there they were in my mail box!

How did I know these would be different than all the other sights I had used?  When I opened the thickly padded envelope there was a pair of big green eyes staring back at me!  I honestly thought they must have sent me a cat, not night sights!  WOW – these are going to be something… in daylight, while standing next to my mailbox I opened the envelope and through the plastic packaging I saw the two rear sights glowing away.  I was tickled pink to say the least!  Night Fision claims 30% more tritium and I swore they meant 300% more!

Upon opening the package, I was amazed at the brightness of the polymer ring around the vial of tritium, the tritium’s glow and the fact that they suggest a gunsmith fit the sights, not jamming them in with a pusher – or worse – a hammer and punch.  Off to the gunsmith for a properly fitted install as shown on the Night Fision website as suggested.  The size was an exact match for the M&P OEM sights, so happily no holster issues expected!

I selected the yellow-green front ring, black-out tritium rears with U-notch.  I wasn’t sure if I wanted to go the square-notch or u-notch rear sight, but I figured a round ball fits pretty good in a round notch.  Wow was that different from everything else I tried; good call!

The black-out rears immediately solved my dilemma of catching the rear sights first upon presentation and the green front ring immediately made its presence known during extension.  On my first draw I knew I was going to be very happy.  A bit of dry-fire training in the evenings and then during the late-night hours confirmed my expectations for the tritium vials.  Outstanding!

It has now been two months of regular training and shooting with my Night Fision Sights and I can say I am completely happy with the product.  They have eliminated my unfortunately recently developed old-guy habit of rear sight acquisition, they have made the front sight super easy to find especially being a cross-dominate shooter, the night sight tritium vials are the best on the market – hands down, no question asked.  I have added the Night Fision Sights to my list of products which I use and recommend to my students based on my experience.  My next set will be with same as above but with an orange ring for student comparison.

I am not a sponsored Instructor, nor do I get any compensation for anything I recommend; I just want to make sure my students don’t waste as much money as I have going through the trial and error process of becoming a safe, legal, moral and responsible owner and user of guns. 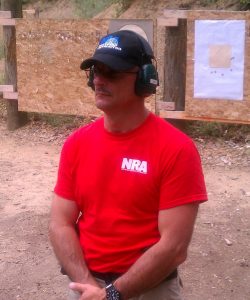 ADVENTURE IN
YOUR INBOX

GET THE LATEST NEWS AND OFFERS.